This wonderful audio book is just shy of eight hours. It took me a day then I listened to it again, believe it or not. It is available through RB Digital. I really enjoyed this book because it covers one of my favorite topics: counterinsurgency. It was a great autobiography of the author and an intimate view inside two of the more recent American wars, both taking place in Iraq: Operation Desert Storm and Operation Iraqi Freedom. All in all he is one of my favorite authors.

John Nagl is a retired Lieutenant Colonel from the US Army, is a graduate of West Point, earned a PhD from Oxford in Counterinsurgency (his thesis was turned into a book), the former president of CNAS (Center for New American Security) and is currently headmaster of the Haverford School in Pennsylvania. He is an excellent writer and has the ability to convey the harsh lessons of insurgency warfare (such as the Vietnam war). He makes the material enjoyable, intriguing and kind of makes you wonder what our top military brass was thinking at times when it came to their approach to military conflict. 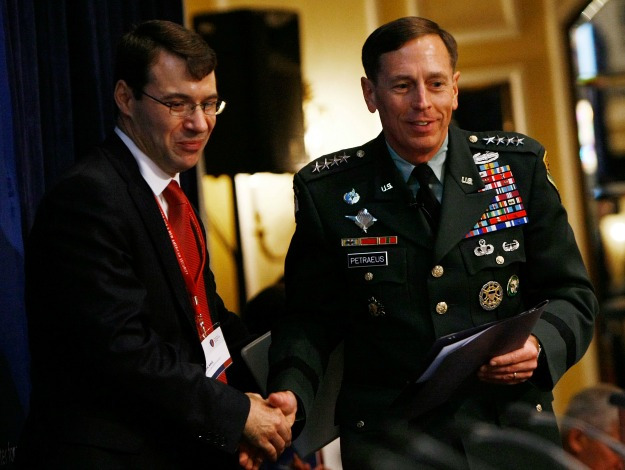 Being an Army tank commander in Desert Storm and an operations officer with the 1st Infantry Division in Operation Iraqi Freedom (OIF) he offers an intimate view of two technologically different combat zones. I liked the story from Desert Storm when he was awoke by a rocket barrage and said he thought rockets were going off on his chest.

His experience while stationed near Khalidiyah in OIF demonstrated to him that the days of conventional warfare are virtually over or at least not the case in this conflict. Insurgency warfare is the future of combat, we need to address it and take a new approach to how we conduct our war maneuvers in the Iraq and Afghanistan conflicts. So he was tasked co-authoring the book on counterinsurgency warfare while in the midst of these conflicts. This became FM 3-24: the US Army/Marine Corps Counterinsurgency Field Manuel, 2006.

I can attest to how poorly OIF was planned and executed. My Quarter Master Company was deployed to Iraq and after a couple months shuffling around country were stationed in Mosul. It felt like there was no plan after the three week long war was over. We were so amped up that we had just won a war in less than a month but nobody knew what the next step was so we just kinda hung out.

The situation was made worse due to the fact that the Iraqi Army, police and most civil servants were fired (termed de-Baathification) by Paul Bremer May 23rd, 2003 bringing chaos to the country over night. This event was the birth of the bloody insurgency that followed when disgruntled Iraqis began attacking coalition forces.

3 rules to live by: Always be Good Tempered, Reasonable and Gracious.

This website is the centralized location for my notes after reading hundreds of nonfiction books. It is the culmination of all I have learned after four decades. Let me be your intermediary between science, history and the good life. The audio book revolution is upon us. Dare to know; prepare to think.

To check out my current book or the books I have read here is my Goodreads profile.