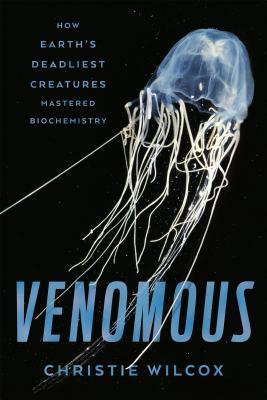 This audio book was six hours in duration and took me half a day.  This is a shorter  audio book than most. My average audio book is nine or ten hours in length. It’s nice getting through audio books in less than a day and starting a new one. I feel like I learned a great deal in less than day. Audio books are such a powerful medium!

It was well-organized, detailed and easy to understand. It is the authors’ first published nonfiction book. She is a research scientist with a PhD in Molecular biology and lives in Hawaii. She is also a popular blogger for Discover Magazine.  She’s done some pretty fascinating research. She knows her science and it shows.

Venom is a modified saliva. She goes into exquisite detail about the personal lives of terrestrial and aquatic venomous animals from all over the world plus the mechanism of action behind their specified venom for their prey species. She tells the story of numerous compounds found in venom that have been turned into FDA approved drugs. I wonder how many other compounds there are in venom that can help people.

Another great part about this book was the section on SI (Self-Immunization). Venomous snake keepers inject themselves with venom in order to protect themselves. If a hot herper happens to get bit than their adaptive immune system will remember how to fight off the venom. There is actually an SI blog. I enjoyed reading this blog and watching the videos. I even started following the blog myself. Obviously I do not recommend this.

I enjoyed the ending. I like how she pushes for conservation of wildlife habitats. I happen to agree. She is intelligent but passionate and dedicated. My favorite parts were on the cone snail (conotoxin), blue ring octopus (tetrodotoxin) and the assassin caterpillar (hematoxic). 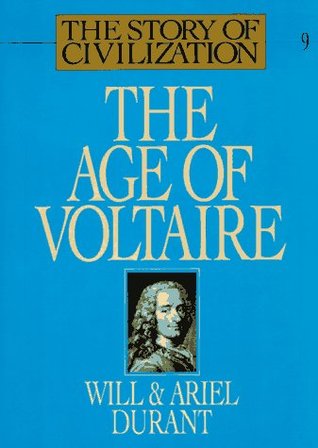 Originally published in 1935 by a husband and wife writing team. This is one of eleven other books in the Story of Civilization series; which covers western history. There are definitely a few other books in the set I’m going to have to read now.

It was actually pretty good. It’s kinda hard to follow at times due to it being so comprehensive and detailed. One thing I’ve come to learn is some of the most important scientific discoveries and inventions took place during the age of Voltaire.

It was about forty-five hours in length (probably the longest book I’ve ever listened to). It took me five days to finish. I am pretty picky about books that are even thirty hours in duration. It has to be a very interesting topic to put that many hours in. You have to be dedicated. If you start a book you have to finish it, right?

A few things I learned:

I think Hurricane Harvey should serve to remind us of how vulnerable our economy and supply chain can be. We have to accept the fact that disasters (hurricanes, pandemics, tornadoes, asteroids) are out of our control. We’re at the mercy of nature and we just live in between the big geologic events, such as the eruption of Krakatoa. We were hunter/gatherers at one time. All cycles end up in their original state.  Were just another species to temporarily set up shop.

As far as the earth is concerned change is completely normal. Our planet has gone through so many changes in the last four billion years and it will continue to do so. Nothing in the universe is stationary; nothing is permanent. There are two billion stars in the Milky Way and they all have an effect on each other due to the inverse square law of gravity.

With the rising population of earth, life and sustainability seem to become more unpredictable every year. The lines for gas I saw a couple of days ago were scary. It was even worse today. Traffic was at disastrous levels this weekend; at least anywhere near a gas station that happens to still have gas. If a disaster in one region can impact our logistical support system statewide and cause serious fluctuations in prices throughout the country then it just goes to show how little room for error we truly have. The last time I saw gas lines of this magnitude were in Mosul, Iraq circa 2003 after we invaded and the country’s infrastructure collapsed.

Lets face it with all the other issues in the world right now it’s important to be ready for anything and take care of each other.

see article: panic at the pump

A Brief History of Human Kind

This is one of the best books I have ever read. It was fifteen hours and took two days. The author has a PhD in history. Starts with the big bang and ends in the present day. It makes mankind look good but also very bad. The author brings up a lot of  issues with our system and institutions. But also has viable solutions. It is highly recommended. I think if everyone were to read this book the world would be a better place.

Just finished Periodic Tales by Hugh Aldersey Williams. If you like chemistry you will love this book. He gives you background and discovery on most of the elements. A lot of good info on elements atomic number 92 and up especially. Its well done and intriguing.

What did I learn:

1. Smoke alarms use Americium (which is a byproduct of nuclear reactors, 95 protons) to give off alpha particles. These radioactive particles are used to complete an electric circuit. When smoke passes through it breaks the circuit and the alarm is set off. Furthermore smoke alarms are the only consumer product dependent on a man-made element.

3. Marie Curie (see pic) is the first female and part of the first married couple to win a Nobel prize (1903). She was the first woman to earn a PhD from a French university. She is the first person to win two Nobel prizes (physics and chemistry). She helped discover radium and polonium. Her daughter also was a physicist and is a Nobel laureate. Note: they both died of blood diseases related to their work.

Finished KL: A history of the Nazi concentration camps by Nikolaus Wachsmann. It was over thirty hours. Took me about three days. Its the most modern version of this subject I know of. It was very well researched and detailed. World War two was messed up. Lets not make that mistake again.

What did I learn:

Similar good book: The theory and practice of hell by Eugen Kogen

Dare to know; Prepare to think

Three rules I live by: always be good tempered, reasonable and gracious.

This website exists to educate, liberate and improve the overall quality of life. Prepare for the audio book revolution. Victory favors the daring!

A gift for you! I love to learn new words. I  made a list (although updated weekly) of easy to learn words that you can apply to your everyday conversations. Please download this Word document by clicking here. You will not be disappointed!

Nothing more inspiring than “we shall never surrender”.

Tales from the mouth of a wolf

Astronomy, space and space travel for the non scientist

These Bones Of Mine

Photography, Artsy Things, and Life on the Farm

Burst Updates, an explosion of news, politics, and opinions.

Books, Ideas, and Literary Culture for Women in Military Life

Confessions of a Cam Girl

Punk is a life that I have chosen to live

My journey through photography

A Free Online Resource for All Chemistry Enthusiasts